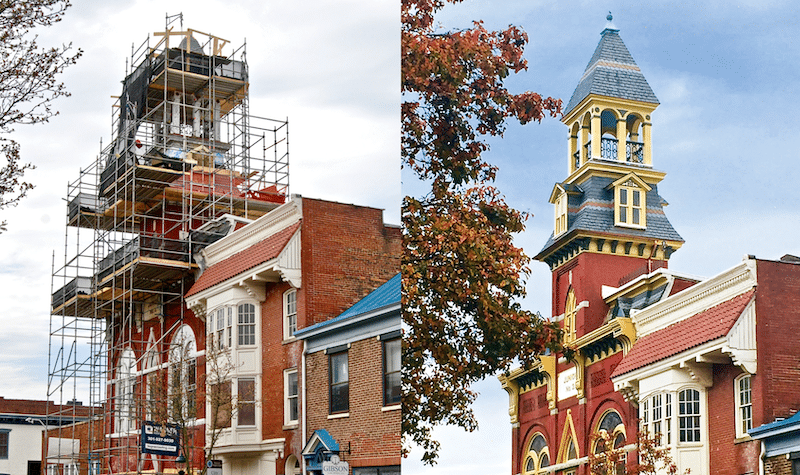 Each year during National Preservation Month in May, Preservation Maryland recognizes people, projects, and places that exemplify and advance the collective preservation movement statewide.

At this year’s “Best of Maryland” Awards, held at the historic Glen Echo Park on Thursday, May 16th, Wagner Roofing Company was presented with a Stewardship Award for the exterior rehabilitation of the Junior Company No. 3 Firehouse in Hagerstown, MD. Alongside Wagner in receiving such honors was the firehouse’s private owner, Doug Carroll.

Originally constructed in 1852, the Junior Company No. 3 Firehouse, located caddie corner to City Hall in the center of Hagerstown’s historic district, dates back to a time in which it was occupied by federal troops during the Civil War as a temporarily field hospital following the Battle of Antietam in 1862.

In 1970, stemming from a nomination from the Maryland Historical Trust, the building was placed on the National Register of Historic Places.

In 2006, the building, which had fallen into significant disrepair, was privately purchased by Hagerstown resident and retired U.S. Navy Commander, William “Doug” Carroll, III along with his wife, Kristy. As proud neighbors of the firehouse and local history buffs, the Carrolls had the vision to return the structure, and its significance to the City of Hagerstown, back to its original glory.

Funded in large part by the Maryland Historical Trust, Wagner Roofing completely replaced the original slate roof and cupola with new Buckingham slate adorned with copper flashings. In the process, the main dormers were also completely reconstructed with all new custom wood framing and windows.

Lastly, with the guidance from the Maryland Historical Trust and the painstaking research performed by Mr. Carroll himself, the historic brick façade was carefully scraped and repainted by Wagner Roofing to the original historically-accurate paint scheme, which extended through the iconic bell tower and surrounding ornate cornices.

The Junior Company No. 3 Firehouse now stands tall amongst the epicenter of the Hagerstown historic skyline, which is visible from nearly all edges of the city.