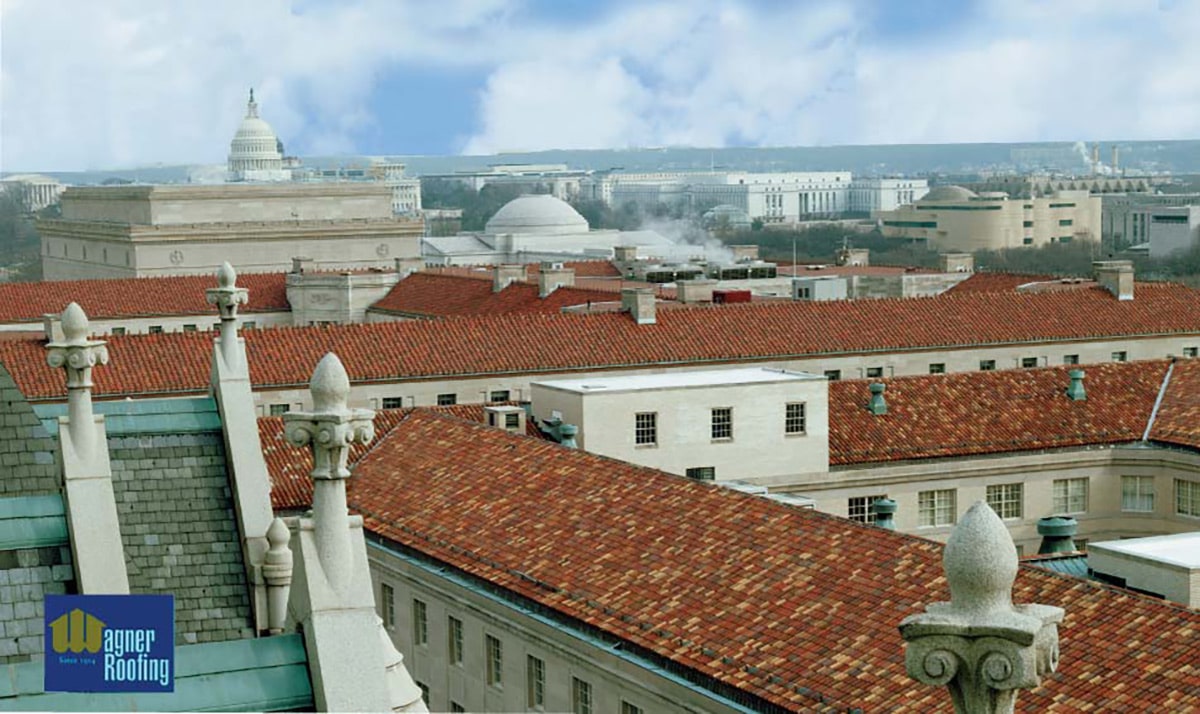 Every year since 1995, NRCA has recognized outstanding contributions to the roofing industry by honoring NRCA members who have met these standards of achievement in four categories: outstanding workmanship, innovative solutions, service to the community, and service to the industry.

This year was no different as standout NRCA members received the 2005 Gold Circle Awards at NRCA’s 118th Annual Convention in Orlando.

The Robert F. Kennedy Justice Center is one of the many pieces of valuable history in downtown Washington, D.C. Therefore, when a restoration project was planned for the building, it needed to be handled in a delicate manner.

“This was an unusual job in that the tile roof did not leak, but the fastening system had failed, causing a dangerous situation—falling roof tile and antifixae tile,” says Chuck Wagner, president of Wagner Roofing.

Probably the biggest challenge of the restoration project was trying to create new products that closely would resemble the existing tile. Wagner Roofing took on this challenge.

The project’s delicate nature required the creation of mock-ups that had to be approved by the General Services Administration (GSA) before work began. The existing pavers on the building’s roof were made of clay tile cemented to concrete pavers. Because of cost considerations, it was decided the original tiles would be replaced with concrete cast pavers that matched the color and texture of the originals.

Wagner Roofing then created a mock-up displaying the paver installation and pattern. The company also had to work with a specialty company to find a method for carefully removing and restoring the terra-cotta antifixae tiles. Training sessions produced full mock-ups of the antifixae tile repairs to determine the best method. The company created a detailed mock-up of the clay pan tile layout, as well.

In addition to the extensive pre-project preparation, the project manager kept a detailed weekly schedule that projected six weeks of work and had a precise drawing that displayed the work that would be done each day.

The company also had to create custom-made metal molds to reinforce the antifixae tile, replace the damaged webs and then hold the composite that was being used.

Wagner Roofing developed a customized safety plan to cater to the project’s unique restoration. Because of the building’s strategic downtown location in the Federal Triangle, between the White House and the Capitol, the company had to consider the presence of pedestrian and vehicular traffic. Therefore, many specific safety precautions were established, especially because the building is a government building. The project involved weekly compliance inspections by an independent safety consultant for the first three weeks; biweekly inspections for the next two months; and monthly inspections until project completion.

“The fact that the attorney general occupied the building—including some of the Secret Service and FBI—while we did our work made it an extremely sensitive area,” Wagner says. “And when we started the job in April 2003, post-Sept. 11 security was at an all-time high, especially at the Department of Justice. Getting enough workers cleared was a nightmare.”

In addition, a falling-debris system was developed for the eight-story building, including the installation of debris netting. The company also erected scaffolding with a 42-inch- (1069-mm-) wide work deck to the roof line and guardrails, toe boards and netting on the underside.

In the end, the detailed work was worth it. GSA praised and approved the project, which Wagner Roofing completed one month ahead of schedule and with no accidents or injuries.

“Wagner Roofing being acknowledged by peers in a national setting is as good as it gets,” Wagner says. “I only wish the first two generations of our 91-year-old family-owned company could have been there to share in the recognition they made possible.”